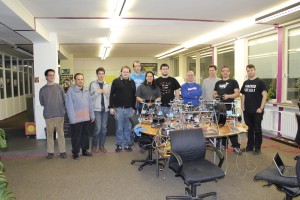 We have been having a great time on the first day of the course, doing almost all of the construction of the machines in one day. The Coworking Space Cologne/DingFabrik is where the event is being held is very nice, and very active, they organise meetings on friday evening, so come by when you are near!

All the participants made the whole machine frame, hotend and other electronics, including hotend and heatbed, and even endstops. We mounted 2 already, only needing to attach the Z axis Hall-0 Endstops on day 2.

This is a new record for us! First time builders making a machine almost entirely on one day! 🙂 We tried a new order of putting the parts together, so the difficult parts were done first, and then the frame would be setup as late in the process as possible. This way the progress is easyer to see, and you dont setup things wrong first, only to repair them later.

We have made a lot of pictures, more are on their way from the participants themselves, and others. First set is in: Thomas Feldmann’s pics

We used different hotends this time, with IRC resident “jreifsnyderb” sponsoring hotends. We have used his J-Head Mk III-B, instead of the standard MakerGear ones we normally use in our build party’s. The buildup of these hotends is very easy, as they also come with groovemount, and are almost fully assembled.

The second day was a bit more difficult, we spent most of it installing the software, as almost every machine was running a different OS. After that we could print some parts on every machine, and i think all people left with the feeling they had a good start in the world of RepRaps. We also built a RepRap for use in the DingFabrik, so they will have one there from now on.

Also we had a visit from Fabienne, who will build one of our kits soon, and hopefully be printing out parts in no time 🙂

We will update this post soon to add the software package we used to provide the people with during the course. We used the Marlin Firmware on the bot, and Pronterface with Slic3r on the PC’s.