Interesting Beaglebone news: In one of SeeedStudio‘s latest blogposts by Eddie Hu about RaspberryPi alternatives there is a competitive analysis with an interesting item. There seems to be a plan within SeeedStudio to release an alternative BeagleBone with Grove sensor connectors, with the (code)name “Beaglebone Green”.

And for better visibility I will zoom in:

The Grove line of products is a set of breakout boards with standard connectors to Analog, Digital, I2C or UART. Most of these tools are sensors and the add-on boards to Arduino, Raspberry Pi, and other small computers. Their site already lists 156 products.

Technically, one of the best boards for the purpose of using a lot of their sensors at the same time is the BeagleBone Black. Their board has specifically added things like analog i/o and real-time processors so no extra Arduino is necessary, like on the Raspberry for instance. The only problem is the intimidating expansion ports that most of the time just work as side bumpers. They do that job very well by the way 🙂

The people at SeedStudio already made a Grove Cape for the BBB, but that is almost as big as the BBB itself, and seems not to adhere to the cape instructions as it has no EEPROM to provide setup info. It also has only two Analog(dual) ports, two UART ports, and two I2C ports. As most Grove sensors only use one of the analog ports, it can get full rather quickly, unless you mod the cables yourself. The digital ports are easily reachable from the GPIO itself, but that is beside the point with Grove modules. All that could be solved by a BB version with a lot of adapters built-in.

So SeeedStudio adapting a BeagleBone to become extra Grove friendly would be a huge boost to the usability for hackers prototyping new ideas with their system. Add to that the possibility that people could add a lot of tutorials to that base, moving the Grove Wiki documentation from mostly Arduino based, to BeagleBone Green based. As prices for ARM based development boards keep falling, the competition to dethrone Arduino seems to be mounting.

We asked about it on the blog yesterday, the post was moderated, but no more info was given. Maybe more will be known soon, there is a mail gone out to ask for more info.
We will also ask someone within the BeagleBone project for more info.

I could not find more info on search engines, maybe you all could do better?

I’m looking forward to it 🙂

Update:(2015-01-29) I got some answers from the SeeedStudio people, they confirm they are working with TI on the a BeagleBoard Green, but haven’t got approval yet. They are sample testing now, and hope to sell the boards in May of 2015. I have asked for more info, but there was no reply yet (two weeks, so chances are low).

Update 2:(2015-02-04) I met someone from BeagleBoard.org on IRC, and he did not want to “give details they aren’t giving about their product”, but explained there are other boards in preparation based on non-BeagleBone designs, and that “BeagleBoard.org is very interested in having people clone the design and trying to help promote those clones”.

“The design is open, so ultimately they can do what they want in terms of product development. Details around branding are still being worked out.” So for now there is no decision on using the BeagleBone name on non-Beagle designs. The “BeagleBone compliant” badge would be only for direct clones, so other designs would need a different badge. For more on the organization’s view on the BeagleBone design, see the talk (video) from Jason Kirdner of BeagleBoard.org during the OHS Summit 2014 in Rome.

As an example of their cooperations he referred to the upcoming Arduino Tre a cooperation with the Arduino team that should arrive soon, and also another board that is under development, the BBP, which seems to be a BeagleBone for Reprap, designed by Truby Zong. An eventual release date is still unclear.

Also there is mention of a new board from BeagleBoard.org itself, the BeagleBone-X15 but that will be a very different design, also at a different price, certainly above $100. But also with lots of more extra’s 🙂 It should arrive in the coming months. 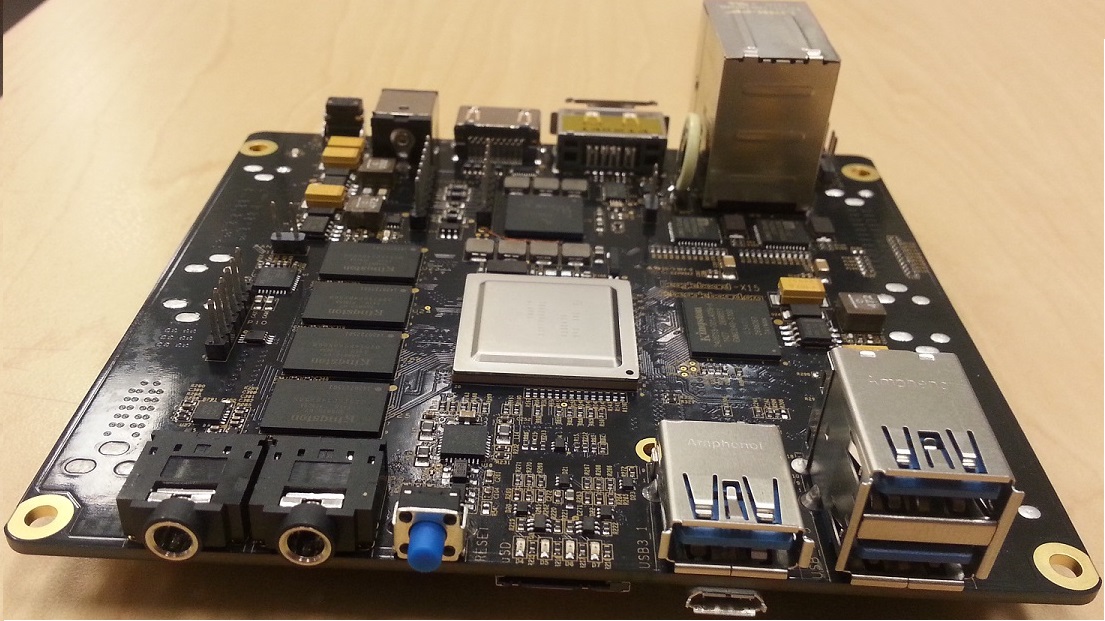 More news when it happens. There surely is a lot happening on the BeagleBoard.org side of things. This update could have been a full post in itself!

Update 5: The story continues in part 4.