It finally arrived! the orderpage has more info and lists the differences between the BeagleBone Black and BeagleBone Green. It will be sold with an USB cable and a user guide. The price is indeed $39, as announced in previous posts. It’s a preorder for now, the site says: “Planned Shipment Date: Aug 20, 2015”.

They also prominently show the BeagleBone Compatible logo. I hope that program will be used by a lot of other boards. That means the official BBB images work for it, but on the wikipage there is a specialized version of the image. 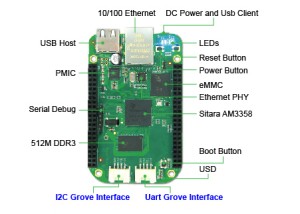 It was a lot of fun following the development of the device throughout this year, and I cannot wait till it arrives. Good luck and thanks to BBG and SeeedStudio! (I’m not one of the mentioned Media Highlights, but this blog is too small 🙂 ) Don’t forget to order the I2C Hub as well, likely you are going to need it.

Update: Yay, I’m included in the Highlights 🙂 Thanks!